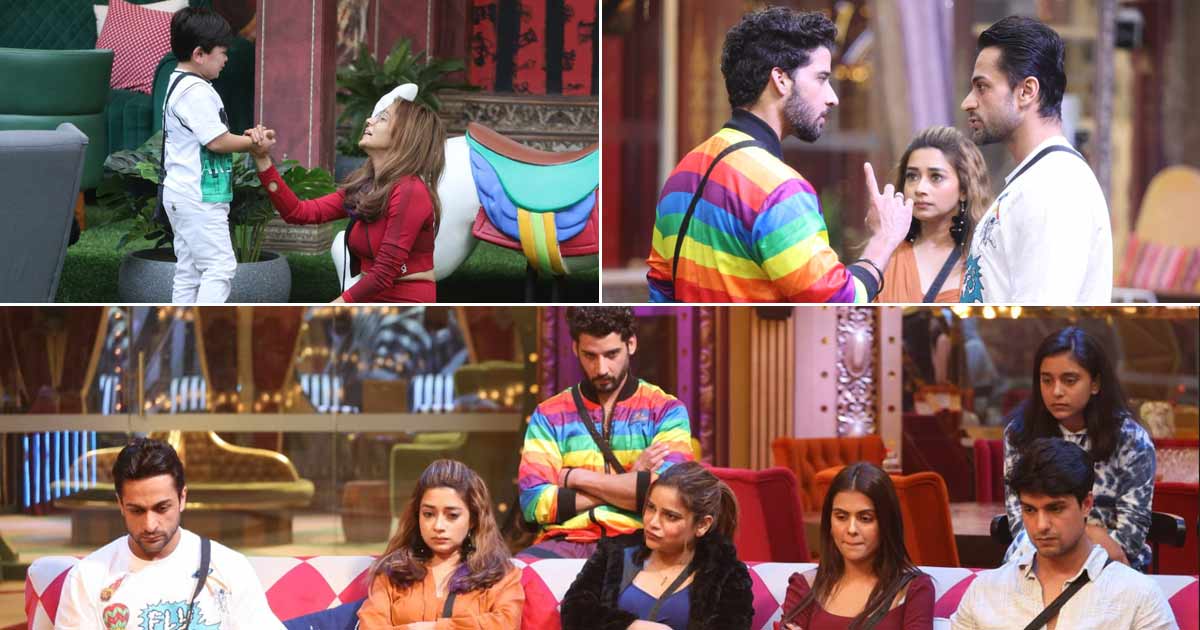 For years ‘Bigg Boss’ has excited us, made us cry and laugh, and of course filled our lives with plenty of drama with conflicts from inside the much-loved house. We all know too well that ‘Bigg Boss’ puts everyone to the test, including love and friendship, as survival in the house is tougher than you think!

This year too, ‘Bigg Boss 16’ from the onset has got us glued to our TV screens, it started off on the first day with a massive showdown between Nimrit Kaur Ahluwalia and Archana Gautam over the change of beds and location. Since then, the fights have only intensified with best friends, lovers, and acquaintances becoming enemies! With fights at every nook and corner, let’s look at the five major ones this week in the house of ‘Bigg Boss 16’.

1. Nimrit Kaur Ahluwalia and Gautam Singh Vig’s tussle on the ration in the house

While Nimrit Kaur Ahluwalia and Gautam Vig hit it off as friends when they entered the house, however, recently, it seems their friendship isn’t as strong as one would hope.

From understanding each other to constantly bickering to not speaking to one another, they certainly have been unable to withstand the pressures of the house! Most recently, when Gautam became the captain of the house for the second time, an argument broke out over the ration of the house.

Annoyed at the way Gautam was distributing the ration without any inputs from the housemates, Nimrit furiously confronts him. Irritated at the unnecessary escalation, Gautam snaps back at her, letting her know that Bigg Boss have given orders to distribute the ration as he sees fit without consulting with anyone.

2. Priyanka Chahar Choudhary and Archana Gautam’s squabble over the ‘Jug’

Everyone’s favourite friends Priyanka and Archana have been giving us BFF goals since they entered the house. They always had each other’s back in every situation, until one fine day a jug of water in the kitchen becomes the breaking point of their friendship!

It is well-known that Archana is alone soldier in the kitchen, hating anyone to work in it while she’s there. Even though this has been a point of contention for other housemates several times, but this time around, her bestie wasn’t spared either!

It all began when the two had to share a jug of water to cook.  Obviously, an irked Archana, shows her displeasure at the way Priyanka put her hand in the jug to knead dough, with no holding back Priyanka quips at Archana, with the two making a mountain out of a molehill! Unfortunately, to-date this tiny squabble remains unresolved and with no resolution in sight since Priyanka nominated Archana for an elimination.

3. Much ado about chicken – the chicken argument between Shalin Bhanot and Priyanka Chahar Choudhary

Shalin Bhanot’s arguments and defensive attitude towards his medical condition and constant need for protein has been the bane of everyone’s existence and a source of annoyance in the house. Loved inside and out of the house, Abdu Rozik always tries to lighten the mood of the house with jokes, including those around Shalin’s protein and chicken intake. He light-heartedly makes a special request to Bigg Boss to give him one burger everyday like Shalin’s chicken as its important for his body and protein.

4. Ankit Gupta and Priyanka Chahar Choudhary’s ‘friendship’ gets put to the test!

They entered as best friends, and co-actors of the beloved show ‘Udaariyaan’, Ankit and Priyanka became the talk of love-town in the house of ‘Bigg Boss 16’.

But as it is said, this is ‘Bigg Boss’ and one must always expect the unexpected! It recently seems though that their ‘friendship’ is on the rocks. It happened right after a fight between Shalin, and Priyanka broke out, with Ankit calling out Priyanka that she keeps repeating herself constantly and to just let things go.

Shocked at this reaction from Ankit, Priyanka is hurt and breakdowns into tears. In the heat of the moment, she tells Ankit that she’s been dealing with him and bearing his behaviour for the last two years, with Ankit retorting the same!

Angers flare later at night, when Ankit threatens Priyanka as he says, “Tum puraani baatein uthaaogi, batau, camera ke saamne chize khol du?”. After which Priyanka responds, telling him to stop with the threats and points at him saying, “Yeh kya battameezee hai!” Will Ankit and Priyanka try to solve their problems, or will they never recover from their fight?

5. The tale of the real-fake friends – Gautam Vig and Shalin Bhanot

After the housemates tagged the friendship between Gautam and Shalin as ‘fake’ in the Court Room task earlier in the week, a fight broke out between the two besties! The next day, while Gautam was eating his lunch, Shalin went to address the fight and patch up their friendship, however, Gautam was angry and unwilling to hear him telling him to go away claiming that their friendship is fake so there’s nothing to talk about. Filled with rage, Shalin gives it back to Gautam, with heated words exchanged, with…Unable to hold back their anger, they almost come to blows until the housemates’ step in. They say you fight the most with the ones you love, but is their bromance real or fake, only time will tell!

Which is your favorite fight until now this season? Hit the comment section below.