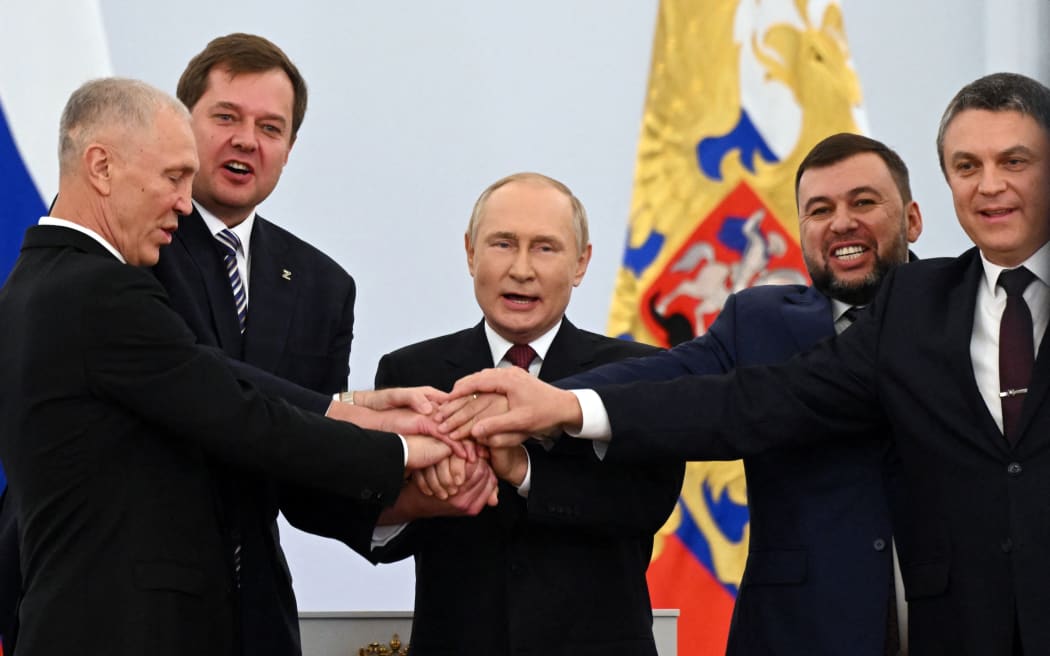 Russian President Vladimir Putin launched the mass strikes in retaliation for the explosion of a key bridge connecting the Russian mainland to the Crimean Peninsula. Putin has vowed a “harsh” response to the Kerch Bridge explosion, which he called a terrorist attack.

Russia launched rocket attacks on Monday that struck in the heart of Kyiv and a dozen other regions, with around 83 missiles fired on a dozen regions in Ukraine. At least five civilians were killed and a dozen more injured in Ukraine’s capital city alone.

Recent shelling also hit other civilian regions across the country, including the southeastern city of Zaporizhzhia, where nearly 20 people died in targeted attacks over the weekend.

Russian President Vladimir Putin launched the mass strikes in retaliation for the explosion of a key bridge connecting the Russian mainland to the Crimean Peninsula. Putin has vowed a “harsh” response to the Kerch Bridge explosion, which he called a terrorist attack.

His targeting of civilian infrastructure drew an international outcry. Here are all the world leaders who have condemned the attack.

“Our hearts are with the people of Ukraine on this awful day,” the State Department tweeted. “Slava Ukraini.”

The nation’s Foreign Office tweeted its condemnation of the strikes after Germany’s Foreign Affairs minister said Kyiv was “in fear of death” following the attacks.

“Residents fleeing from rockets during morning rush hour. An impact crater next to a playground in central Kyiv,” the agency said. “It is despicable & unjustifiable that Putin is firing missiles at major cities & civilians in Ukraine.”

“This is a demonstration of weakness by Putin, not strength,” Cleverly wrote on Twitter.

Global Affairs Canada, the country’s foreign policy agency, condemned the strikes in a tweet and said “targeting civilians is a war crime.”

Italy’s Ministry of Foreign Affairs and International Cooperation said it was “horrified by the cowardly missile attacks that hit the center of Kyiv and other Ukrainian cities this morning.”

“We reiterate our firm and firm support for Ukraine, its people and its resilience, and at the same time express our full condemnation and utmost indignation for a gesture that aggravates Russian responsibility in the context of its unjustifiable aggression,” the ministry said in a statement.

“Targeting civilians is a war crime and Russia must be held accountable for the indiscriminate terrorising of the general population of Ukraine. Iceland strongly condemns this senseless assault,” she tweeted on Monday.

Josep Borrell Fontelles, the High Representative of the European Union for Foreign Affairs and Security Policy, promised additional military support for Ukraine in the wake of the attacks.

“Such acts have no place in 21st century. I condemn them in the strongest possible terms,” Fontelles tweeted.

Secretary General Jens Stoltenberg tweeted the security alliance will “continue supporting the brave Ukrainian people to fight back against the Kremlin’s aggression for as long as it takes.”

Zbigniew Rau, the minister of foreign affairs for Poland, said the strikes were an “act of barbarism.”

“Russia cannot win this war,” Rau tweeted. “We stand behind you Ukraine!”

Anniken Huitfeldt, Norway’s Minister of Foreign Affairs, said in a statement that “those responsible must be held to account” for the strikes on civilian infrastructure.

“Russia must stop its illegal invasion and leave Ukraine,” the department tweeted.

“I am convinced that all good forces must stop Putin’s war. It is the only way to security and peace in the world,” he tweeted.